She Served, I Served: How This All Began

For me, the choice to serve wasn’t as obvious as it had been for my mother when she left home at 17 and a half to join the Navy. Ultimately, military service came at a different cost as a lesbian serving under ‘Don’t Ask, Don’t Tell’. At any moment, I could be found out and sent home with a dishonorable discharge, and I knew that going in. In the end, none of that mattered because I was born and raised to serve.

And so, off I went in 2008 to serve in the United States Navy. I proudly served as a Cryptologic Technician Interpretive (linguist) and had the opportunity to go to the Defense Language Institute in Monterey, CA where I learned Persian-Farsi. I spent two years in Monterey, serving under some of the best leaders that I have ever known, many of them women. These individuals shaped me into the best version of myself, something that I hold sacred in my life to this day.

Much like many other women though, military service was a difficult place to simply exist. At every turn, there was always someone who celebrated my failures, someone who undercut the value of my rank and achievements, someone who reinforced the system meant to keep women in their place, and someone who made me work twice as hard for half the respect.

When I was medically retired in 2012, I came home to return to school and get my education at the University of Washington. There, I would earn my Bachelor’s and Master’s degrees and help to found a new department on campus, Student Veteran Life, that would serve the holistic needs of student veterans on campus. At the time, I also started to take on leadership roles in the veteran community. Despite the fact that the community was growing and we were really starting to make a space for veterans on campus and throughout the city, I still felt outside of the community I was building.

What I was coming to realize was, no matter how many leadership positions I took on or people I brought into the community, my leadership was being discounted. I’ll never know if it was my identity as a woman, a lesbian, or a gender non-conforming person that was so off-putting or threatening, but there really wasn’t a place left in all that I was building for all of my identities to be celebrated, not just my one as a veteran.

There was a common thread emerging: we all felt outside of the veteran community.

Through this communal pain and anger, though, came the Minority Veterans of America. What started as a text message between myself and another woman veteran, Katherine Pratt, became a Google form for others to share their stories with us. On the first day we opened the form, we received 35 submissions. These 35 people told stories of adversity, of struggle, but ultimately of triumph over circumstances.

We decided not to stop there though, those 35 became 50, 50 became 100, and 100 became 206. Our 206 members represent over 1,500 years of combined service. They come from all over the country and the world. They are LGBTQ, People of Color, Womxn, Religious Minorities, and Allies, and sometimes all of the above.

For me, the Minority Veterans of America is a bright future born from the pain of a bleak past. I hope that the loneliness of being but one person out in the world struggling to find my way, to find my community, to find my family, is a closed chapter in the story of my life. I refuse to accept the community as it stands today, I want a brighter future for those who hold minority identities in the veteran community.

As MVA’s first President, I get the chance to serve again. Nowhere in my wildest dreams when I was learning what it meant to serve did I think that I would one day be serving as the leader of a growing movement. And that’s what we are…a movement.

Our movement is here, will you join us? 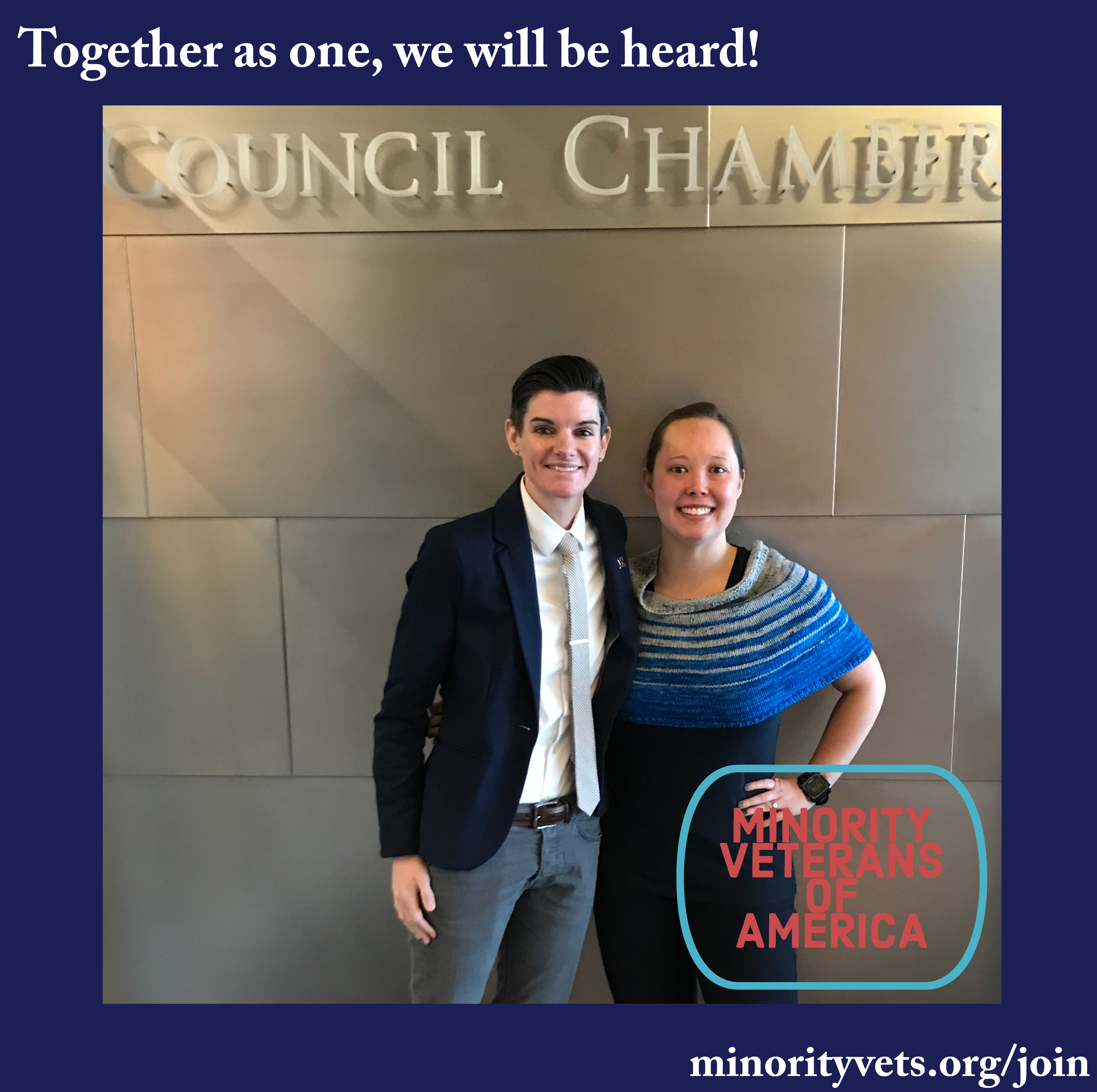 Lindsay is a Navy veteran who served from 2008-2012 as a Cryptologic Technician Interpretive (Linguist). During her time in the service, she attended language school at the Defense Language Institute in Monterey, CA where she learned Persian-Farsi. After spending two years at a cyber intelligence command, she left the Navy and returned home to Seattle.

Upon returning home, Lindsay attended the University of Washington where she earned her BA in Near Eastern Language and Civilization and Islamic Studies and an MA in International Studies – Middle East.

In 2017, Lindsay resigned her position as the Commander of an American Legion post to, along with Katherine Pratt, start the Minority Veterans of America to ensure that there is a community of support around the underrepresented veterans so that we may see the true diversity of the U.S. military reflected in our veteran communities.

PrevPreviousSomething They Can Never Take Away from You
NextCounseling on the Battlefield: When the Abyss Stares BackNext