Counseling on the Battlefield: When the Abyss Stares Back

Summer 2005 in Ramadi, Iraq was hell.  However, the blistering 138 degree heat paled in comparison to the hellfire my fellow troops and I endured with constant rocket and mortar attacks accompanied with daily firefights between us and insurgents on the streets.

At this point in time, I had just returned from my R&R leave which was a relief to me as the whole time I was away from Iraq, I somehow missed it. It was a noisy, gunfire-filled afternoon, but it was a particular incident that quickly brought me back from my recently-returned-from-R&R mindset: five Marines were hit with multiple IEDs under their vehicle in front of the Government Center in downtown Ramadi. Those Marines were just a few of the infantry grunts that I had worked with at checkpoints with my buddy Jones on Team Lioness.

Sergeant X, one of the sergeants we knew from working mainly at Ramadi’s Government Center came to the clinic in tears and made a beeline straight to me in front of Arnold and Jack. She was still in Baghdad en route to Ramadi from R&R – she didn’t know yet. These two males – both who’ve given me hell the past year for being everything they hate: a minority, a different belief system, and a woman – looked at each other.

Jack rolled his eyes and gave a look to Arnold that said, “He wants to talk to the woman, of course.”

Little did they know, I had worked with Sergeant X before and he wasn’t merely trying to pick me up as they always insinuated. Of course, in their eyes my clinical skills had nothing to do with the rapport we had with these Soldiers and Marines.

His eyes were blaring red and I began to ask which ones were dead. “I’m glad you’re here, at least you know…” he kept saying as he continued to identify the five Marines who were killed after rolling right over a spot in the road that turned out to be five 155 rounds waiting to detonate.

He then tried to change the subject, asking me how I was doing. I couldn’t believe it, but I kept encouraging him to tell me more. He did, and the pain in his eyes spoke more than his tear-soaked words as though he lost family members.  A lump grew in my throat as I too wanted to cry.  The urge to scream until my lungs fell out, to put my fist through a wall. The death of part of myself was overpowering.  The devastation, crushing.  I held my breath as my eyes burned, trying to console him, asking him to recall what he saw.

“He was still smiling,” referring to one of the Marines whose face was still partly recognizable after detonation.

The turret gunner was blasted out of the vehicle immediately upon explosion and thrown meters away into a wall and the others in the vehicle were literally in pieces. I offered my advice, and since I knew him to be a very spiritual and religious guy, I consoled him along those lines; something I’m extremely reluctant to do in any case.

“They’re feeling no pain now. They passed instantly and you did your very best to protect them. Pray for them, they’re in God’s hands now.”

I wasn’t even sure of anything anymore, not even God at this point.

“I know, I just have to trust God, you know,” he said still crying so painfully and passionately.

These men are his brothers. Brothers from another mother as some of the Marines used to joke. Or sisters from another mister in reference to Jones and I. These guys were hilarious, brave, humble, feeling, thinking people. And now they’re dead.

A slow montage of their smiles and jokes paraded through the back of my mind as I held back my own tears while helping Sergeant X catch his. I held my breath intermittently throughout conversation, a trick I’ve become accustomed to in order to halt any crying of my own. I had to put it away and deal with it later, I had to be strong for them now.

After all those months on Team Lioness, Jones and I made a vow to look at this war with open eyes. Seeing what was really going on, beyond what the Banana Republic vest-wearing war correspondents or newspapers said. We didn’t want to hide from the good or evil our eyes and souls would encounter, so we stared deeply and attentively into the abyss.

Unfortunately, that abyss can certainly stare back, and for us it surely did. Were we unwise to stare into oblivion for so long? We stared so long into this living nightmare that it never left us, leaving us longing to be woken up. Running through the streets of this post-apocalyptic nightmare throughout this deployment had scarred us, changed us. I didn’t realize the impact until we got back to the US, but it was there all along, waiting.

My eyes can no longer savor striking colors nor can any of my other senses indulge in anything I once enjoyed thoroughly – nothing, even the simple, makes sense anymore. This was our price to pay for leaving our eyes wide open in the darkness. We sacrificed our inner peace to help pull others out of hell, only to witness the horror ourselves, forever burning its image into our souls.

The next day? Another suicide bomber drove a car into a group of Humvees out in Ramadi. Two Humvees were destroyed and eight of our Marines were killed as a result.  Just one of many Ramadi days I was constantly questioning if all of what we endured had any real purpose, and who was really profiting from all this pain.

In Iraq, I built myself up to be a fortress, unable to cry or mourn openly.  Sergeant X would become a metaphor for my homecoming; Americans comfort the male warrior, even when he cries.  They shake his hand and pat his back. The female warrior is allowed no space to grieve, she is expected to hold it all in that psychological ruck sack or risk being shamed as not only weak, but someone who doesn’t deserve any honor at all.

Every war is about money and resources, often with religious and political ideologies blinding and guiding the general public and disenfranchised.  While resources can be finite and ultimately disappear, money doesn’t; it just changes hands.   In the meantime, innocent people die, you lose hope, and you’re left among ruins to rebuild a life in the aftermath of trauma.  Trauma from which you will never fully recover.

The anguish, the guilt of being alive, the regret of not being able to do more might as well be a bullet in one hand and being home always feels like you’re holding a gun aimed at your own head in the other.

The combat odyssey never ends; it’s merely assuaged and managed through whichever coping mechanisms work effectively for you – if any.  There is no magical fix, no single one-size-fits-all cure for PTSD.  It is a process of discovery, and the challenge is to break the mind away from the seemingly endless war within the soul. 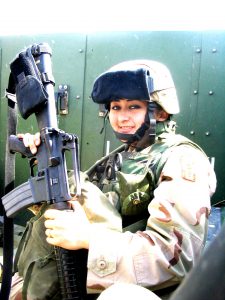 M.B. Dallocchio is Las Vegas-based artist, author, and social worker who served 8 years in the Army to include serving as the Combat Stress Control NCOIC in Ar Ramadi, Iraq and on Team Lioness from 2004-2005. She is the author of the “Women Warriors” chapter in War Trauma and Its Wake, Quixote in Ramadi, Everyday Chamorro, and The Desert Warrior. Follow @MBDallocchio and at www.thedesertwarrior.com.

PrevPreviousShe Served, I Served: How This All Began
Next“We learn Russian, so you don’t have to.”Next