“We learn Russian, so you don’t have to.”

I was failing out of college and I lacked direction in my life.  Across the street from the apartment I lived in was a recruiting station.  I was coming out of a very confusing first relationship with a woman and so I guess I thought, “What the hell, let’s join the Army!” All the service branches were located in the same building and I chose the Army because my uncle, brother and father had all been in the Army.

After I enlisted, I was at the MEPS station three days later, not knowing what the hell was going on.  I was on my way to Anniston, Alabama, home of the Military Police Corps at the time and when I arrived, I think I stayed in that state of confusion until graduation day.  I don’t remember a whole lot from basic and AIT except that two women in my platoon got separated from service for having a relationship and it left an impression. After graduation, I was on orders to go to a physical security site in Germany, but thank goodness I had done well on my DLAB test and they sent me to language school instead.  47 weeks in beautiful Monterey, California. This was during the eighties, so I spent my year learning Russian. Our company motto was “We learn Russian, so you don’t have to.”

This was all before DADT was official policy, so even though seeing two of my fellow trainees discharged, from 1985 to 1993, people just generally went on about their business and didn’t give a fig about who you were involved with.  At least that was my experience.  After DADT was put in place, it was like a spotlight was on those of us who identified other than straight.

After language school, I served two tours in Berlin, Germany, before and after the wall fell. It was a fantastic experience professionally, being able to liaison with Russian officers and witness history and it sure was a whole lot of fun!  While I was there though, I struggled mightily with my sexual orientation. I tried my damnedest to be straight.  I was unsuccessful.

From Germany, I went to Fort Drum, NY, which is located about 30 miles north of where I grew up.  It was nice to be able to go home on the weekends, but for 12 of my 24 months there, I was deployed somewhere.  I was promoted to SSG during this time and my friend group got smaller and I became more insular.

I returned to Germany. Schweinfurt, which is mostly a farming community.  But, I had a good job as a Desk Sergeant and lived off post and got some friends again.  Another mostly fun 3 years.

After that, there was more responsibility and more bullshit and less fun and less friends.  I was stationed at Fort Leonard Wood to be a drill sergeant and instructor, then to Korea, Area I for four glacially slow years.  I finally retired and came to Colorado Springs for personal reasons that have not necessarily worked out as planned.  When I first transitioned from the military, I was alone and thought too damn much and was suffering effects from my military service.  I isolated myself more and more.  Three years after I retired, I really started to put the work in at the local VA health system and I adopted my puppy, Samantha, who I call my lifesaver, because she really was and is.

When the Post 9/11 GI Bill © was passed, it was a huge break for me.  I enrolled at a 4 year public university in the area and got my Bachelor’s and Master’s degrees.  I was also fortunate enough to begin to work with student veterans in higher education and continue that work to this day.

This year, I attended the 2018 Student Veterans of America (SVA) Nat Con.  I hadn’t planned on attending, but we had a large delegation from our school going, so I went.  It was fortuitous, as I learned about SVA Pride and Minority Veterans of America.  I met so many great people there including our MVA president, Lindsay Church.

I am proud to be out and be myself.  So many years in the military, I had to keep my thoughts to myself and go along to get along.  It’s damn exhausting!  I feel fortunate to witness so much participation and resistance and people standing up for themselves. There was so much misogyny, homophobia, sexual harassment in the time I was in.  It seemed normal because that’s the way it was.  But I’m so glad it’s changing and that I have a voice that I use now.

Regardless, I am proud of my military service and I stand on the shoulders of the women who had to go through worse things than I did. And I stand here to lend a hand up for those women that follow. 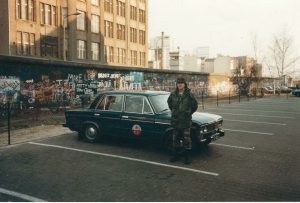 Heather retired in 2006 and returned to school in 2010. She earned a BA in Psychology and an MPA from the University of Colorado Colorado Springs. She is a proud member of Minority Veterans of America.