During the last few weeks of my first quarter as a grad student, I received a phone call from my mother saying that my two nieces had no clothes to wear. She asked me if I could send some clothes to them as a sort of Christmas present. I was devastated to think about kids with no clothes during winter and to think that at the time I had no relationship with these two little girls, even though they were my nieces. I sent my mother money to buy them clothes.  Subsequently, I decided to fly home to surprise my mother and to see if my niece’s mother would let me bring them back to live with me. On December 29, 2016, I flew back to Seattle with two additions to my household that have changed my life and way of thinking forever.

In the days following, everything became much more real. Having the responsibility of two lives, solely dependent on me, gave me a greater sense of the need to make the world we live in safe and free of the problems I faced growing up as the child of a single mother and an imprisoned father. When I was little, I didn’t think about grad school because, as a first-generation child, I had no conception of what it was. For the first time a few months ago, I considered what it might be like to be called Dr. Turner someday. While I did not understand as a child what the terms “education equity”, “systemic inequality”, or “generational poverty” meant, these things certainly affected me in a lasting way and I refuse to sit silently while these issues continue to impact future generations and the lives of the people around me.

Today, black women in our society experience less college preparation, less opportunity in the job market, and greater risks of violence and incarceration than their white and male peers despite black women being one of the most educated groups in the country and one of the most active groups of voters in recent history. There has been a systemic devaluing of black women in the United States. That needs to change and I will work to ensure it does, so that my nieces can thrive in a world that places as much value in their lives as every other human being.

Reflecting on my ten years in the military, I feel I spent too much simply falling in line and moving though different units and duty stations mostly detached from what was happening outside in the big world. I figure most veterans spent their military time in a similar manner as the need to be ever focused on the mission, as opposed to our own personal politics, is central to tenets of military readiness. And, while I agree that both the mission, and in turn taking care of soldiers, is essential in a highly effective and functioning military, I have regret that I did not work harder to affect change outside of the military. Specifically, changes that would have affected the lives of my soldiers and their loved ones, regardless of if they wore a military uniform or not, like fighting to end DADT or marching to bring light to over policing in black and brown neighborhoods.

With thoughts in my mind about the need for there to be substantial and lasting change in the world to make it safe for my children, I jumped at the idea when my classmate, Andrew Peppler, came to me in January 2017 asking if I was interested in developing a podcast centering the voice of vets and their ideas about how we can work towards dialoging about our nation’s issues across party lines. 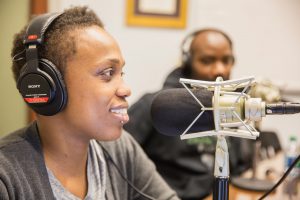 Over the next few months, Andrew and I developed (and now co-produce and co-host) a podcast called Speak Freely. I saw the podcast as an ideal opportunity to publicly discuss issues like poverty and race equity by providing a perspective from a uniquely diverse group of people, veterans.

During each episode of Speak Freely, we bring veterans, a population often assumed to be conservative and often left out of political discourse, on the show to discuss and provide common sense and collaborative solutions to issues like education reform and income inequality. In making the podcast, I’ve come to understand that, if we are meant to produce any tangible solutions to these big issues, we must embrace and uplift the voices of groups, like veterans (especially those who identify as people of color or LGBTQ), who often go unheard or are explicitly left out these conversations.

So I ask, what are doing to disrupt the status quo? To reshape America into a place that doesn’t respect certain identities over others? To ensure your loved ones can thrive in a world where every life lived is valued? 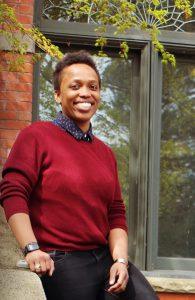 Joy Turner was born and raised in Shreveport, Louisiana with her three brothers and mother. In 2006, she left home to attend West Point where she graduated in 2010 with a B.S. in Art History, Philosophy, and Literature. Post graduation, she served as a Military Police Office throughout the U.S. and abroad deploying to Guantanamo Bay, Cuba in 2014 for nine months.  In 2016, she decided to change paths and is now a student at the Evans School of Public Policy and Governance at UW pursuing a Master of public Administration with a concentration in Nonprofit Management and Social Innovation. As a grad student, Joy has served on her department’s diversity committee and now serves as the President of the Evans Student Organization. As a vet, she also co-hosts a podcast, called Speak Freely. Joy self describes as a kite enthusiast and introverted people lover. After grad school, Joy is interested in pursuing a career in the nonprofit sector working on efforts to increase social equity across the U.S.