“You Weren’t Born To Die, You Were Born To Live.” 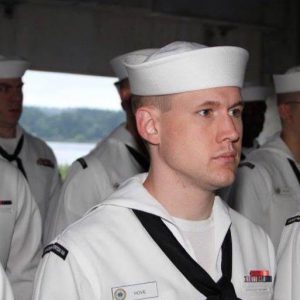 “You weren’t born to die, you were born to live.” These are the words that were said to me,
during a dream, the night I contemplated taking my life.

I joined the United States Navy, in February 2011. I never would have thought that I would
follow in my Father’s footsteps in joining the military, but I found myself, on the bus, pulling up to
Recruit Training Command, Great Lakes, IL. Stepping off that bus, was like stepping off into a completely
new world. I went from being a simple ‘country boy’, working and living in North Central Montana, with
not a care in the world, to deeply regretting the fact that I had the world’s worst nervous bladder and
questioning why I chose to wear my cowboy boots to boot camp…

Before leaving Montana, I told the girl, that I swore was “the one,” that we would stay together, regardless of the distance or time apart. I told her that I loved her and gave her a kiss and got on the plane. Months later, after boot camp and ‘c’ school, I now found myself, as a Hospital Corpsman, on a flight to Guam, where I would spend the next two years (NOTE: prior to that flight, I thought GUAM was an island below Florida… Boy, was I wrong) I left everything, including “the one,” behind, to embark on a journey, that would completely and forever
change me.

Guam was a culture shock, to say the least. I went from living in a state where there was little
minority representation, to now becoming the minority. I was assigned to work in the emergency
department, at the Naval Hospital, where sutures and tetanus shots were given out by the dozen,
supplies often ran low or completely out, and death was a frequent visitor.

As everyone does, I became numb to the tears of family members who lost a loved one, I became bitter towards patients who had true concerns about their health, and I began to turn into someone I couldn’t recognize. In my personal life, I had become very ugly towards “the one.” She was the sweetest, kindest woman, with the biggest
heart and I tore her down. I allowed myself to become so removed from myself, that I lost who I was. It
was also, during this time, that I began to explore my sexuality (Cause why not add that to the mix of
being a hot mess).

When I was growing up, I was teased horribly. “Gay”, “Fag”, “You’re such a GIRL.” These, and so
many more, were said to me… for years. I spent many nights, crying and questioning why people would
say those things about me. My parents would reassure me that I wasn’t gay, and my extended family
threatened me with the bible, to make sure I wasn’t gay. It wasn’t until I was on Guam, that I began to
explore that side of me. Veteran’s Day, November 11 th , 2012 I was invited to be on the Oprah Life
Lessons show, to talk about “how to help others, when you can’t help yourself.”

Prior to the show going live, I was asked by one of the producers, who was a gay man, if I was gay. We spent a good 30 minuteswith him trying to convince me to go on the air and share that I was questioning my sexuality (Looking back, I wish I would have!) Instead, Oprah, when Oprah found out that I had just ended my relationship
with “the one,” she told the world “Ladies, Tom is now single. Tom from Guam.” After that show aired, I
had some individuals come to me, from my childhood, and apologize for what they had said to me. It was then, that something in me clicked. I had my very own, AHHA moment. I am GAY.

I began to explore what that was. What did it mean to be GAY. I began to go on dates with guys,
which was, once again, such a foreign world to me. One night, after going out on a date, I went back to
base… and ended up in his room. It was there where he tried pressuring me into having sex with him. I
refused, but he kept pushing and pushing, to the point that he was on top of me and I had to push him
off and immediately left. After that night, he spread around that I was gay, all the while, he had a girlfriend, who also worked at the command I was at. I was mortified. What just happened? I just come out gay, to myself, and now EVERYONE knows.

“You weren’t born to die, you were born to live.” These are the words that were said to me,
during a dream, the night I contemplated taking my life. I had planned out my suicide. Never in my life
had I felt more alone, more afraid, more hurt, angry, or broken. I am so glad that a greater force took
over and I woke up the next morning, not having made such a horrific and final decision.

After many counseling session, self-reflection, and support from my family and friends, life
began to change for me. One night, while still living on Guam, I was cleaning my dorm. I happened to be
on one a gay dating app, looking at guys back in the states. I knew I would be flying through Seattle, so I
typed that city into the search box. I began to scroll threw all the guys, when I came upon Doug. Doug,
who had this great smile on his face, caught my eye… and it did help that it showed that he was online.

So, I messaged him. That initial message turned into multiple hours of messages, which turned into
skyping, which turned into me flying back to the states to meet him in person. I met the man, who I
would eventually marry, on a dating app… thousands of miles away…. While he was at work and I was at
home, cleaning.

My life completely changed. I eventually left Guam and headed for the Pacific Northwest. I
spent about 2 years at Naval Hospital Bremerton, before completing my time in the Navy. I went from
active duty to being a college student, within 3 days. Once again, another life decision, that would
completely change me.

When I first arrived at Seattle University, I wanted nothing to do with veterans and military
members. I wanted to be done with that part of my life. I met a fellow veteran, during orientation, who
nagged and nagged and nagged for months for me to go to a veteran’s club meeting with him. I refused
and refused… and REFUSED, until I finally caved and went. It was during that first meeting, that the
group was told that someone needed to step up and be president of the club, or the club would be
dissolved.

Mind you, this student organization was really the only thing, at that time, that was offered to
veterans on campus. I don’t know what compelled me to do it, but I raised my hand and said, “I guess I’ll
do it.” That decision right there, would be followed by a great deal of activism, being labeled the
squeaky wheel, an immense amount of personal growth and healing, and the ultimate development of
programs and services that support veterans!

During fall of 2017, when Seattle University did the Grand Opening of The Outreach Center,
which serves Student Veterans and First-Generation Students, I remembered back to that dream that I
had… “You weren’t born to die, you were born to live.” I saw the opening of this center, a huge victory
and the realization of my passion and my purpose. I know spend much of my time, when I am not with
my husband and children, advocating for and supporting my fellow veteran.

I find gratitude, for every single moment, that has led me to this point in my life. I am a United States
Veteran. I am a GAY man. I am ME! 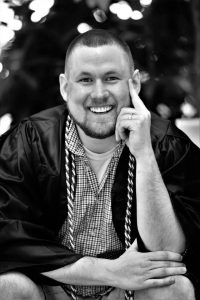 Tom Hove grew up in a very small town, outside of Great Falls, MT. He joined the United States Navy and became a hospital corpsman. He spent two years stationed at Naval Hospital Guam and then finished out his contract at Naval Hospital Bremerton. He is married to a Seattle Police Officer, Doug Hove. and they’ re currently foster parents of two beautiful babies! Tom works at Seattle University, developing and supporting veteran programs/services, while he attends USC to complete his masters degree in social work.