The Historically Traumatic Move from Home: An Indigenous Womxn’s Story of Service 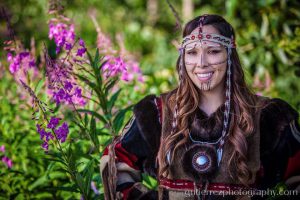 What does it mean to serve as an Indigenous person?

It means Columbus Day is a holiday you get off if you’re not on duty. We even get a 4-day weekend. If that isn’t incentive to continue to perpetuate settler colonialism through glorifying Christopher Columbus as some founding hero for Americans, I don’t know what is.

Serving before Indigenous Peoples’ Day was a recognized holiday meant questioning my own reasons for joining and feeling like an imposter. It meant being unable to speak up and question the recognition of this colonizer, because who doesn’t want a 4-day weekend? Who listens to the 17 year old brown girl straight out of her Alaskan village anyway. Not many people in this Navy.

Honoring Columbus Day, serving as an Indigenous womxn meant questioning every reason I put on a uniform. Always wondering if I was dishonoring my relatives who – not even a century ago – were mistreated and dehumanized by this same United States Navy. It meant tuning out and dissociating when memorizing and reciting those cadences that were used by this very military when they took over Unangax villages and burned them to the ground.

It meant learning the battle cry of the oppressors.

It meant that I moved away from my homeland. Yes, everyone has to move away. But my story is different from the dominant glorified move from home to serve.

I moved away and the memory of my aunties, uncles, and grandparents who were forced to move from our traditional homelands by this very military 76 years ago resurfaced. It meant memorizing the Bluejacket’s Manual and Navy history books that left out this very important part of United States history; the intentionally silenced and forgotten war. The only time in U.S. history the enemy was on “U.S. soil.” The Battle of the Aleutians: when the Japanese bombed Dutch Harbor, Alaska on June 3-4, 1942, captured the 41 Unangax residents of Attu Island and who – thanks to the U.S. government – were never able to return to their traditional homeland.

That war. That war that led to the internment of over 881 Unangax people who were evacuated to abandoned, broken down fish canneries and mines in Southeast Alaska – more than 1,500 miles away from the Aleutian Islands. All while the white residents of the Aleutian Islands were allowed to stay. But the Unangax were evacuated for our protection? This was an evacuation that led to the detrimental WWII internment of Unangax people where the United States military moved into our traditional villages, ransacked homes, took our family heirlooms as “souvenirs,” and yes, even burned our villages to the ground.

During the Unangax internment in Southeast Alaska, 1 in 10 Unangax people died from the deplorable living conditions and complete disregard by the United States government who put us there. Interned Unangax people were left without food, potable water, and blankets or clothing to endure the freezing Southeast Alaskan winters. Not to mention the stark contrast of environment and resources of Southeast Alaska to the Aleutian Islands. Traditional land and subsistence resources were drastically different from the treeless, land-animal-less Aleutian Islands. The Unangax were interned against our will for the duration of the war, long after the Japanese were routed out of Alaska, and were largely neglected by the very government that said it was protecting us.

When I moved away from home to serve in the Navy, the trauma of my parents and grandparents internment in WWII was ignited. My body remembered the feeling of unease and displacement as a military ship – not too different from the one I served aboard – piled hundreds of Unangax people onboard and removed them from our traditional homeland.

This move was one that told me that in order to be “successful” in modern society, I must relive this trauma. It is one that was passed to me from my dad. From my grandma. My grandpa. My aunties.

What choice did a 16 year old homeless “troubled-youth” who was put into the system way too young have anyway. My choice was military school. Upon graduating from military school at 16 and having nowhere to live, enlisting in the Navy on my 17th birthday was the best possible case for me. This was the only choice for “success” I had. Like many other Indigenous People who served before me and alongside me, service is one of few doors open allowing us access to success, rise in economic class, and escape the impoverishment that intentionally binds Indigenous populations since colonization.

For a hard headed, hard working, chip-on-her-shoulder girl who was raised by her father on the ocean doing subsistence, I saw military service as just another challenge that I would overcome. It was just another obstacle put in my way since the settlement of colonizers on Indigenous land.

I served in the Navy for my dad who raised me as a strong, independent, vocal agent for the Unangax people; for my family. I enlisted in order to become financially stable to come home and take care of my dad. But first, I just had to make it past all the “Eskimo” jokes, the racism, and the endless sexism for being a woman working on guns onboard a small, recently integrated vessel. The only woman. The only brown woman. What they didn’t know was that in Indigenous society – at least the small village I was born and raised in – my genitals made no difference on my ability to hunt, fish, or provide for my family. In fact, Indigenous womxn are the backbone of many of our cultures, including the Unangax culture to which I belong.

Knowing that my ancestors made it and found a way to survive genocide, enslavement, sexual, emotional, physical and mental abuse in boarding schools; knowing that my ancestors prevailed even through watching this country attempt to “Kill the Indian, Save the Man;” even through the internment of Unangax people in Southeast Alaska during WWII and all the physical, cultural, and identity loss that ensued and has persisted throughout settler colonialism, I knew enlisting in and enduring the Navy would be but a small feat.

~Haliehana “Alagum Ayagaa” Stepetin is an accomplished Navy veteran, a college student, an athlete and an artist who has even bigger ambitions for the future. The last person ever born on Akutan Island, she grew up living a subsistence lifestyle and developed a strong reverence for the ocean and the outdoors.