Decolonize Love: Fighting Colonialism in the Age of Indigenous Renaissance

A look back on a 12-hour conversation where love was decolonized between two veterans.

When I met Alessandro on our first date, he told me he was born in Genoa, the birthplace of
Cristoforo Colombo, or Christopher Columbus as we know him in the United States. My heart sank
for a moment, and as much as I tried to hide my disgust over hearing Columbus inserted into a first
date conversation as a Chamorro woman, it didn’t go unnoticed.
“Are you okay? Is something wrong?” Alessandro asked.

I was excited to have met Alessandro, or Alex, as he’s more commonly known among friends. We
met on Match.com and had our fair share of relationship disasters. He’s also an Italian Special
Forces officer and a Sarajevo veteran. Having witnessed genocide against Bosnian Muslims, he
seemed to both get my macabre humor as well as my outrage over the exploitation of vulnerable
people.

Instead of playing it safe and pretending I wasn’t irritated, I gave him an honest answer.
I could have saved serious topics for another time, but I figured after all that I had been through in
life – from surviving sexual assault as a child to combat in Iraq and domestic violence as a veteran
– I needed to test his mettle now before wasting anymore time over sashimi and prosecco.

On a cool fall evening in Las Vegas, I told my date that I was disgusted by Columbus and that the
celebration of a genocidal psychopath was not exactly my cup of tea. Languages, culture, ancient
traditions, and more were lost through his so-called legacy, and that the person he was on a date
with was a byproduct of 400 years of Spanish, German, Japanese, and now American occupation
of the Mariana Islands. That, sure, we learn about Columbus in 1492, but not Chamorro people
crossing the Pacific in 5000 BCE. We learn about the Roman Empire, Western Civilization, Italian
Art, but not about Indigenous people of the Pacific or the Americas.

Alex didn’t come back with a quick response, counterpoints, or any degree of mansplain or
whitesplain that would’ve made me flip the table and walk out. No. He listened. And when he
spoke, he validated what I was feeling was pain and rightfully so – and that if he were in my shoes,
he would be angry, too. While he didn’t understand what it was like to walk around as someone
who most people don’t know exists, he wanted to learn more, but only as much as I felt
comfortable to share.

To speak as a Chamorro woman combat veteran with another veteran – albeit from another
country – and have the person concede the point was mind-blowing. I was dazed. While I was
usually ready to walk into these arguments fully-armored and ready to open fire, he just listened.
And because he was ready to listen instead of arguing against my service, my history, and my
value as a person, I felt comfortable in returning the favor.

With Alex listening, and giving me space to breathe instead of backing me into a corner where I’m
fighting for my life in every patronizing conversation I’ve had since returning from Iraq in 2005, he
gave me something that I needed. Something that all colonized peoples have needed for
generations: allies, not conquerors.

On our second date, we continued our chat, and went right into another light subject: our
experiences in combat. Needless to say, we got the scary shit out of the way first.
This conversation took us through a 12-hour moment in time where we both decolonized love
between two people. In our first kiss shared at a Las Vegas speakeasy in the Arts District, I felt that
this was the first time that I wasn’t being treated as a conquest, someone to own, tame, or be
made to submit and accept abuse and humiliation. My love life had felt, up to this point, as a series
of conquistador attempts in getting me to lose myself and to receive nothing but trauma and pain in
return.

The first kiss from Alex was the beginning of a new era and the end of the old chapter on love in
misguided imperial form, being treated as a target or conquest instead of a person who was
simply looking to love and be loved back. Imperial thought, in any gender, that I’ve witnessed for
years completely ruins love and sex. The moment we stop treating people like conquests, territory,
and expendable objects, we can finally open the door to experience true intimacy, otherworldly
sensuality, and peacefulness.

All this time since my return, I felt love to be this sensation of standing in the middle of a
firing range. If I stood up, I could die. I had to keep moving, avoiding any means of detection.
If I stopped, I could get hurt again. This time, it was different. It wasn’t a firing range I was
standing on, but something that felt like an airstrip where I could take off at light speed into the
sky. Above all harm, I could fly and nothing or no one could hurt me. As he held my hand, I
sensed that I was not only going to take flight, but I had a parachute of reasons to give this
person a chance.

Someone who looked me in the eye as an equal, who didn’t scoff at my confidence or
self-worth, who empowered me to be a better, stronger version of myself – it was all new. The
chastisement, the belittling of who I was, or the minimizing of previous accomplishments I have
seen in others remained absent.

During his second deployment to Sarajevo in 1997, Alex suffered from a traumatic brain injury from
a vehicle roll-over during the war that damaged the right side of his body and left him in a coma.
Persistent pains also stemming from his time as a paratrooper. He hadn’t really shared his military
experience with anyone since leaving the Italian Army, and I was honored that he felt comfortable
enough to open up about it.

He held my hand and instead of judging me, kissed me, and looked me in the eyes. Not down at
me as someone inferior or up at me on a tokenized pedestal, but right in my eyes as an equal. He
gently passed my fingers over the old injuries, where I could feel where he fractured his ocular
cavity and where the bones have not healed quite right. While tall and strong, he was tender,
passionate, and present. I kissed his scars on the right of his head, then he immediately pulled me
in for another long, passionate kiss in the middle of a bright, loud Las Vegas casino hours after the
speakeasy closed.

Days and nights from there on were spent together and it became very clear, very early on, that
having found each other also meant we could start planning a future together. The irony of
someone who advocates for indigenous rights managing to find not only a common bond, but love,
with someone from Columbus’ hometown is not lost here.

When privilege meets the marginalized, the former listens and needs to process their own
positionality in centuries of oppression, and what they can do to make sure not to enable any
further damage. The latter needs space and the freedom to express oneself to begin the healing
process and to maintain sanity in a world that has largely left them behind. As in any relationship,
both people have work to do in creating a lasting peace.

On Indigenous Peoples’ Day, I imagine Columbus Day still being celebrated around the United
States as a colonial anachronism that extolled putting boots on the necks of Indigenous people of
the Americas and Oceania for over 500 years. In an evening where I shared both personal and
historic truths, I found an ally who now helps me fight and organize against ongoing injustices and
celebrates with me. Instead of struggling to mute one another, we share our languages, cultures,
cuisine, and parts of ourselves that no one else knows. Intimacy is, without a doubt in my mind, the
opposite of Imperialism. It’s easy to dehumanize and judge someone else, but it takes so much
more to love them.

While we don’t have to hide who we are, we recognize in one another as partners in dismantling
systems that keep us divided and broken. To decolonize love, we have to begin with loving
ourselves enough to demand respect, dignity, and space – and to have the courage to allow others
to love us back.

~M.B. Dallocchio is an Iraq War veteran, author, social worker, and multimedia artist. She is an
NSEP Boren Scholar who advocates for cultural and linguistic preservation along with raising
awareness of issues affecting underrepresented minorities. M.B. and Alex married in 2014, and
currently reside in Los Angeles, CA. You can see more of her work at
https://www.thedesertwarrior.com. Twitter & Instagram @MBDallocchio. 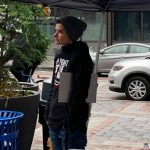 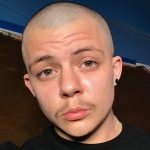 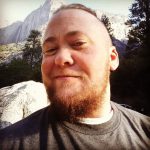